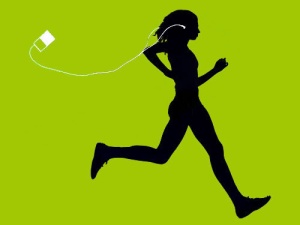 Ever heard of the Mozart effect?  The term speaks to the phenomenon whereby one’s IQ improves following exposure to a few of Wolfgang’s strains, as if a trace of the composer’s genius were transferrable to his listener through the medium of music. Arguably, the effect has been scientifically proven.  It doesn’t take a genius to gather that a similar effect is observed wherever running and, say, that modern master of the pop collage known as Beck meet (the “Beck Effect” has a nice ring, I think).  Such pairings have been known by iPod-using runners to improve running performance–without elevating red blood cell count. Win, win.

We all march, as the saying has it, to the beat of a different drummer.  (For me, an amateur bassist, the bassist is my drummer). This makes the very idea of a perfect running playlist suspect.  The perfect playlist is admittedly personal.  And it is admittedly fleeting.  Of course musical tastes and music catalogs change over time, but usually long before they’ve had the chance to morph much, our brains have long since grown immune to yesterday’s perfect stimuli.  What lit a fire under us and made our molecules all wiggly last week may have all the effect of soggy newsprint under a pot of tepid water this week.

Even one’s approach to compiling the playlist is personal.  Playlist-making methodologies are as diverse as the runners who employ them.  Here are a few approaches with which I have been acquainted.

1.) What’s in a name: Here, one looks for the words run or running in the song title: “It keeps you Running.” “Running with the Devil.” “Miles Runs the Voodoo Down.” “Running on Empty.” “Born to Run.” You get it.  Personally, I don’t see how such a loose collection of songs whose only claim to relatedness is a three letter word (or its verb form) can be of much value to one in need of audio adrenaline.

2.) Take your soundtrack to the track: One may build a playlist from songs associated with triumphant scenes in feel-good films. “Gonna Fly Now.” “Eye of the Tiger.” “Chariots of Fire.” “We Are The Champions.”  For me, this approach often flirts with the formulaic, the trite and the overplayed.  These are frequently the kind of songs whose campy melodies have to be flushed out of your brain with the musical equivalent of a fire hose (Firehose—now that’s a good running playlist band.)

3.) Poetry in motion: One may select pieces of sweeping lyrical or musical beauty in the hope that they will calm the nervous system, freeing the runner to more fully experience his or her run. In this case, peak performance is probably not the objective. Peak enjoyment is. In this frame of mind, my favorite piece is  “The Moldau” by classical composer Bedrich Smetana.

4.) The mathematician: While I have not met him or her, I have heard of runners who strive to carefully match the timing of songs to their running cadence. That is too much math for me.

Here’s a playlist of my own (using none of the above methods), made up of songs that I’ve personally road tested over months or years. Included is some insight into the rationale behind the selections. By employing similar rationale, you may be able to compose the playlist that gives your training that extra push or gets you through that slog of a long run (you know we all have them). Tip: Compile multiple playlists and cycle through them to avoid burnout.

Finally, I don’t recommend any song that incorporates sirens or barking dogs; such sounds can be very, um, disconcerting.  And of course, give your friend the iPod a break now and then, and commune with your own thoughts and with nature.