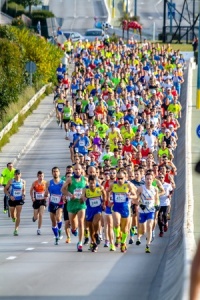 Is it just me, or was 2014 the year for superhero-themed costume races? Probably it’s been a growing trend, and it took me until Halloween of 2014 to notice. The fad undoubtedly has something to do with Hollywood’s recent recycling of the superhero in film. Whether legion or obscure, every superhero ever known to the big screen, dime-store or illustrated novel seems to have had his or her 15 minutes of fame in the new millennium. There’s someone super for everyone; there’s even someone for us generally unassuming runners. But we needn’t look to the comic-book likes of The Flash to find a fellow whose superpower includes superhuman speed. We might have read in any modern equivalent of the Daily Planet that another men’s marathon world record was smashed in 2014. Yes, Kenya’s Dennis Kimetto made his superhero debut at the New York City Marathon, turning in an astounding 2 hour, 2 minute and 57 second performance. Nowhere in the news was there any mention of a cape. Here apparently is a superhero who puts his shorts on one leg at a time.

Meanwhile in other 2014 news (which the Daily Planet did not consider newsworthy), The Penguin announced his retirement. No, not The Penguin who gave the dynamic duo headaches as a member of the Batman franchise’s rogue’s gallery. I refer here to John Bingham, the running columnist better known by his self-deprecating nickname, “The Penguin.” For decades the columnist served as de facto champion for a new kind of “runner,” one with no aspirations to win races or age brackets, whose ambitions are seldom more lofty than to stick out a training plan and finish a target race, one who can find inspiration in the modest and chummy persona of a writer who likens his running style to the waddling of his overdressed spirit-animal. Beginning in 2015, runners will be without The Penguin for the first time in decades. To whom will they turn for his brand of genial motivation? Will no ungainly animal shuffle, wobble or lumber forward to take up his mantle?

The juxtaposition of these news pieces is perfect for the relating of two concurrent narratives of the running experience over the past several decades. Paradoxically, running has, since the early 80s, grown in dual and somewhat contradictory directions. On the one hand, running’s assault of the record books has contained all of the frame-by-frame drama, the POW! and BAM! action-histrionics, the lithe and muscular figure-drawing of an illustrated novel, as this or that super-runner took turns doing his or her worst to the poor embattled record book. The Book took a beating and gave ground alright, but like a thing constructed of adamant, stands ready to challenge all comers. On the other hand, we are forced to take as the comic book symbol of the second running story the obscure, nebulous antihero of a million faces and somatotypes: DC Comic’s shape-shifting Everyman. In the 1970s there were 1,000 Everymen to each Superman, Captain America or Flash; now there are 100,000 of us. In Metropolises all over the country, Everymen and Everywomen form cities of 70,000 runners, cities that move at an 11- minute mile pace, consume swimming pools of Gatorade and disperse in 5 or 6 hours’ time. But unlike Everyman, best known for imperfectly imitating better known super heroes (and aren’t they all better known?), we commit no fraud when we dress like Kara Goucher, attempt to run with Shalane Flanagan’s form, and submit our race entry blank with the confidence of Paula Radcliff. It never crosses our minds to be a proxy for the likes of them. We know in our marrow that we must run our own race.

And yet how we marvel at the fantastic things others do. And how little we think of the fantastic things we ourselves do. By our way of seeing things, it is they who wear the cape every day; we don it maybe once a year, and even then with the irony that attends a costume party. “Every ship is a romantic object, except that we sail in,” Emerson said. The media latches on to stories of world records smashed, of Dean Karnazes running 350 miles or 50 marathons in 50 states in 50 days, of coach Alberto Salazar’s runners taking the silver and the gold together. We come to be amazed by not just any hero, but by superheroes. Mesmerized by the theatre of the athletically absurd, we forget the far more remarkable and galvanizing fact that something as simple as getting out the door for a three mile run, three or four times a week saves and transforms ordinary lives. So accustomed are we to scanning the skies for superhero fly-byes, we force ordinary heroism to do its everyday work beneath our radar. Spend too much time in the shade of the tall trees against whose height we insist on measuring ourselves, and see if we are not tempted to lie down and go to sleep there.

Ultimately the march of human running performance will meet with an absolute limit, the record book will grow stiff and fail to yield, all blows against it will be answered with a THUNK! that rattles the combatant’s bones. But every individual born from that time on will have the freedom of discovering his or her own personal limits, both in running and in everything else. No matter our age and fitness level, there exists in each one of us more untapped potential than exists in human performance in general. Most of us could coach ourselves to lopping 10 minutes off our marathon best or 1 minute off our 5k best. World record holders have no such slack with which to play. They live in a world where the most Herculean efforts, under the direction of the world’s best coaches, are unlikely to shave more than a few seconds off their PRs. They swing with all their might and make but a tiny dent. We swing and the POW! of our blow has repeating OOOOOs that trail out of the frame. Even if our superhero “owns” a world record, he or she knows that another will soon wrest it from them; it is more a thing rented on a short lease than it is a thing owned. We, on the other hand, own a personal record, and know that if it is ever broken we will be the one to break it.

Like a superhero, Dennis Kimetto has just set the world marathon record. But Dennis Kimetto cannot rescue me from my languor this morning. That is not his errand. This morning, my body and mind are Gotham, and, ordinary as I feel, I am the only hero within calling distance. The morning sun shines like the Bat-signal summoning my will to action. I will not let me down.