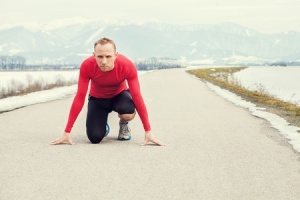 No matter how near one comes to mastering the art and science of running, the question of why one runs at all is bound to remain frustratingly elusive…and often the very thing about which well-meaning non-runners are most curious. (With greater distance and objectivity, non-runners often understand better than runners what is truly remarkable about us).

As for help mastering our sport, one is unlikely to find my articles instructive in the usual sense; there are plenty of excellent coaches to help you get faster. Additionally, my articles don’t review gear. Nor do they usually report on the feats and triumphs of the running elite (though I may drop a name or two in context).

My articles aim at creeping up on, from unexpected angles, the slippery question of why we runners keep doing the thing we do. You might say I am–along with those who run and follow my brand of writing–engaged in a life-long persistence hunt requiring both endurance and thought. Fortunately there isn’t just nourishment in the shared consumption of the game we stalk; otherwise, a few null results would lead us to graze in more plentiful pastures. There’s sustenance to be had from the hunt as well–especially when the animal one tracks behaves as if it were mythical. Tales of its pursuit are ripe for devouring in whatever form they are narrated (from written articles to TED Talks); ingesting them infuses a tribe with a vigorous hue, an unmistakable élan. They are the stories that rouse us to take up the hunt again and again, regardless of our latest outcome.

My relationship to running is–to borrow an anthropological phrase–that of the participant observer. That’s what it’s supposed to be, anyway; anyone acquainted with me or my articles will tell you that somewhere along the way I went completely native.

Runthink. What’s to keep it from veering off into overthink? How much thought does it take to run well? Certainly there is a time for thinking, and a time for doing. Motivation springs from far deeper recesses than we realise. Letting motivation happen on its own is fine…until the day it doesn’t happen. Understanding where it comes from gives one a better chance at coaxing it out when it refuses to come freely.