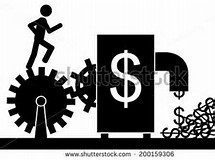 Fifteen years ago the average runner was bigger. Before you Google it, I hope you’ll read on.