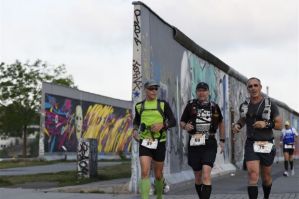 Everyone loathes a tourist. Everyone except marketers, that is. But that’s getting ahead of the story.

Beginning in the early 1980s the recreational running world had its first unfortunate encounter with what exercise physiologists have since termed exercise-associated hyponatremia (EAH), a potentially life-threatening state of water intoxication caused by excessive pre hydration. At first blush, it is tempting to want to blame irresponsible marketing for the nascent malady. Though in fairness, marketers were only happily amplifying exercise physiology’s abrupt hyper-awareness of hydration’s alleged leading role in exercise performance. If exercise physiologists (frequently on the sports nutrition industry’s payroll) and the evening news were energetically imploring endurance athletes to drink more, the advertising departments of sports drink companies grew giddy urging runners to double whatever “more” was. The consequences occasionally turned fatal, resulting in at least 13 EAH-diagnosed deaths.1

Could marketers be going too far once again? In the late 1960s, Marshall McLuhan wrote this prescient line in The Medium is the Massage (here McLuhan plays on the word Message): “Our official culture is striving to force the new media to do the work of the old.” While McLuhan’s phrase, like the quadruple entendre of his book’s title (i.e., message, massage, mass-age and mess-age), is pregnant with a litter of alternate meanings, one thing it surely suggests is that those who employ advertising media are bound to repeat past mistakes, and that we, as the “official culture,” are going to have something to do with it. Where before the mess-age was “drink more,” today it’s “run more,” using seductive ads smattered across a wide range of digital and print media forms to encourage milephiles to go completely around the bend while consuming pricey sponsored races, online training plans, running camps, apps, apparel, nutritional supplements, and even automobiles to fit the ultra image.

Henry David Thoreau, one of the greatest architects of the sustainable life, objected to “coarse labors long continued” on the grounds that they required that he consume coarsely in support of them. For runners of 50 and 100 mile races, a voracious appetite for life keeps pace with as great an appetite for gel packs (or some such highly concentrated and portable food source). And with higher average training volumes than any other recreational running cohort, ultrarunners join puppies as a running shoe manufacturer’s best friend.

Sure the corporate entities who sell these products would love it if everyone became a life-long ultrarunner, but marketing psychologists know that isn’t likely to happen. Still, over the short haul, an ultra tourist’s money spends as well as a lifelong runner’s money does. In fact, tourists are targeted the world over for the ease with which they can be separated from the fun money they’ve laid aside for “must-sees” like the DaVinci Code walking tour. Take it from the ultimate tourist, Beldar Conehead: what tourists do best is “consume mass quantities.”

In these litigious times, advertising departments are more savvy than they used to be. Taking refuge behind accident waiver and release of liability forms, and the ever-tightening and oft-maligned qualifying standards of high-profile ultras, marketers are free to employ every trick of psychological manipulation to peddle these extreme experiences. Consider the stock memes of ultrarunning culture: the alpine “trail” without a power line in sight; the youthful, ultra-hardened body (which may actually belong to a weight-trained fitness model); the cool-kid aesthetic; the pithy, ego-affirming quote; and the panoply of top-dollar accessories on full display. Amid a confusing lack of scientific consensus, advertising is aggressively pushing the cult of more is more and all the gadgetry that goes with it. Tim Noakes’ book Waterlogged, an in-depth examination of the EAH epidemic, exposes the dangerous fallacy of that way of thinking. Too much profit-motivated “more” and too little buyer sense always results in more disaster. Significantly, it was running tourists and not veterans who took EAH’s brunt.

Like sodium serum concentrations, ultrarunning is nothing to play around with. Isn’t it time that advertising departments backed off pitching ultras as hip weekend getaways guaranteed to improve one’s life and augment one’s image? (I’m surprised they haven’t claimed that ultras regrow hair.) The least race promoters should be required to do is to list contraindications just as pharmaceutical advertisers must. What we should want is a glossy ad that doesn’t look as if it were trying to gloss over the truth (maybe the medium really is the message). In her blog Wild Defined, ultra veteran Candace Burt lists “not having fun anymore” as one of the excuses runners most frequently give for dropping out of an ultra. “I’m not sure why we think that ultras will be ‘fun,'” Burt asks? I have a one word answer for her: advertising. As buyers, isn’t it time we revisited the ages-old warning to beware? Otherwise parties on all sides of the exchange are in danger of playing a starring role in a classic cautionary tale. To the unwary and overconfident newbie, a first ultra (usually a 50k or 50-miler with no qualifying standard) is likely to wind up resembling Westworld after the live bullets start flying, or Jurassic Park after the electric fences fail. If you think that either Yule Brenner as a gunslinging android or a pack of ravenous velociraptors were tough mudders, try hitting your third wall, experiencing hallucinations and suffering rhabdomyolysis–in the middle of nowhere. In the movies, we know who chokes hardest on their just deserts. It’s usually the naïve and profiteering promoter or the vicariously liable lawyer. That’s entertainment. But in reality, it’s the impulse buyer who is most likely to get plucked off the outhouse commode by the figurative T-Rex. The woefully underprepared ultra tourist may find that an ultra-gone-south is more vengeful than even Montezuma.

I suppose all of this caution makes me the Ian Malcolm of this script. In that case I’ll paraphrase my favorite naysaying movie mathematician attired in somber hues: we were so preoccupied with whether we could that we didn’t stop to think whether we should.

So what is it with tourists, anyway? What makes them so ridiculous, and apparently so easy to spot? Mostly it’s that they’re too eager–eager to the point, in fact, of forcing experiences. “The way to kill a feeling is to insist on it,” writes D.H. Lawrence. It’s as if the finished memory, the t-shirt and the finish-line selfie had become more important than the experience itself and especially the patient preparation required for its proper “enjoyment.” And sometimes tourists are just nuisances, like when, Bill Porter reports in his book Zen Baggage, their guided tours introduce bullhorns to Zen monasteries.

Capitalizing on the tourist’s eagerness to own a memory, many ultra promoters are acting like the archetype for Rekall, Incorporated, the fictional retailer of custom memory implants from the sci-fi film Total Recall. “Have you always wanted to climb the mountains of Mars, but now you’re over the hill?” the ad asks. “For the memory of a lifetime, Rekall, Rekall, Rekall.” Hearing the jingle, Quaid considers purchasing the memory of a Martian vacation. Harry intervenes: “A friend of mine tried it. Nearly Got himself lobotomized.” Now imagine opening a magazine in 2015 and reading the words, “Want to run far, but you’re far from ready?” While a running tourist may not end up lobotomized, the portion of her brain that loved running is likely to suffer serious trauma.

Despite all of my admonitions I think that the chances of an ultra tourist making it home in one piece (I say nothing of finishing) are still pretty good. My concern is this. Unpreparedness unscrupulously lured into reckless action most often leads to deeply negative experiences. And deeply negative experiences lead to aversions—lifelong aversions or one-and-done burnout.

As a crusader for the running lifestyle, I’ll weigh in any day on the side of a well-measured, sustainable and lifelong participation in the sport. I shrug my shoulders at the tourist who rides a zipline through our sport on a tragically misguided “tour de force” that, if one could hear it, would sound as harried as the “Flight of the Bumblebee.” Locals often sigh in relief when they overhear tourists say, with a thinly-veiled mixture of contempt and patronization, “Nice place to visit, but I wouldn’t want to live here.” For my part, I’d rather they did want to live here (without the bullhorn). A neighborhood doesn’t need a living dinosaur theme park to be a great place to bring up the kids. If more miles is what one really wants, then one ought to try being a runner for 20, 30 or 40 years. To any who’d consider it, I leave this Zen phrase: “The Road has two rules only: Begin and Continue.”