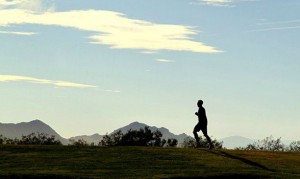 The longer one runs, the more fluent one becomes in the use of its spare language. Whether rooted in English, Tarahumaran or Kalenjin, running talk does not usually hold audience with conundrums; it answers most puzzles by earnestly suggesting, what else but a run? Between runners, all of this passes for shorthand; as long as there are routes and races to run, it matters little to us whether there is a translatable answer to the question most frequently put to us by non-runners: in a word, “Why?”Asked why he cared to climb Mount Everest, George Mallory famously answered, “Because it’s there.” With those three words he became a poet of mountaineering and of all sports; wisely, he answered the question with a clever dodge; he let the mountain speak to the mystery. He needed only to allude to the famous pinnacle, nature’s ultimate pièce de résistance, and others were able to form a clear mental picture of the thing he hungered to overcome, whether or not they cared to add its overcoming to their own bucket lists. Had he any words to add to his perfect utterance, the result would have been a subtraction.

But utramarathons, marathons, 10ks and neighborhood routes are not “there” in the same sense that Everest is, as a conspicuous, imposing terrestrial feature calling out to some universally human (if latent) spirit of adventure. The proving grounds of the runner are human inventions superimposed on a neutral geography, a compact agreed on by us and our GPSs or a few race marshals.

Yet make no mistake: there is a mountain. For each runner the contour lines and stratigraphy differ. Though the runner’s obstacles exist mostly in the realms of metaphor, they are in the end no less real than Mallory’s mountain. For some there is an encircling range, the ascent of which is the sole means of escape from poverty and prospects best described as mean, brutish and short. One hears this in the interviews of the Kenyan and Ethiopian athletes who have, against all odds, clambered up a steep path that carried them through a narrow pass and down a leeward side. This seems appropriate somehow for a people who occupy—literally–the Great Rift Valley. Others have it more like Rasselas, the story-book prince whose only release from a life of courtly extravagance and unwholesome entertainments lay beyond the earthly ramparts insulating the Utopian valley of his boyhood. Picture Bruce Dern, gifted actor and fortunate son, with his streak of 17 years of daily running to blunt the toxicity of Hollywood’s fickle fame and a decade’s-long Vicodin addiction.

To each his own mountain, raised from unseen forces and pressures, formed of what complex aggregates others may only imagine. The bedrock is laid early. Assay the runner’s psyche and read his history in the strata. And don’t be surprised to unearth a skeleton or two. Who can know the story of Billy Mills and not know in his heart that it was the catastrophic tectonics of cultures in collision that raised the mountain up which he had to run? During a harangue by his college coach over a disappointing race, the fiery half Oglala Lakota Sioux Indian with the “white man’s haircut” is reported to have shot back, “What half do you suppose lost today?” We may be sure that Mills stood atop much more than three podium steps when, in 1964, he was awarded the U.S.’s first 10,000 meter Olympic Gold in one of running’s greatest upsets. The mountain wouldn’t come to Billy, so Billy went to the mountain.

Of our uplands, the greater part perhaps is rooted in accidents of our prehistory: the where and the when into which we are born, the lot we draw at birth, including the industrial diseases that are now part of the modern runner’s inheritance. A part too is owing to the accretions of our personal history. One feels this in ultra-runner Jenn Shelton’s confession, “I started running ultras to become a better person. I thought that if you ran 100 miles you’d be in this Zen state…It didn’t work in my case—I’m the same old punk-ass as before—but there’s always that hope that it will turn you into the person you want to be…”
Yes, there’s always hope; flowers are usually rooted in dirt, after all. But how long must we run the mountain before we realize that the mountain is us and that we have only to get out of our own way? Because its location in the psyche conforms to no point on a topographical map, there’s no telling the miles we’ll need to log before we may tag its summit. We haven’t the perspective to triangulate its true distance from us, and to know whether or not the summit we think we see is false.

Surely our mountains are made of more than molehills, but of what exactly? Only a great deal of digging will bring such facts fully to light: The names we were told could never hurt us, the insults added to injury, the hats we didn’t throw into the ring, the towels we did; and so much else that, by way of consolation, we convinced ourselves was immaterial. (No amount of EVA foam will fully shield our thin skin from the jagged memories that underlie these cushy figures of speech. This is the job of callouses.) Here too is all that we repressed and sublimated; all that emasculated, dehumanized or disempowered us; the prognoses and prognostications we couldn’t abide; the anti-depressants and statins we refused to take. Sleep, science tells us, cleans the machinery of our brains, but there are dustbins nearer the soul that its nocturnal housekeeping never touches. Neglected, the overspill may rise so high as to throw menacing shadows and summon storm clouds to its heights. Against these, we must add our day labor. These piles we may never disperse; but by years of sweat and by the counting of mile markers, we may rise above them. This is but one way of overcoming: the runner’s way.

Do we doubt that a figment of the mind has influence enough to call a body to run? How common is running in dreams? So common that even our dogs do it. Sometimes the illusion is so vivid that a body actually becomes involved in the running dream. The crux of running’s enigma is that others see only the running but not the thing being run. No wonder they’re confounded.

To run is to invite accusations that we are running from something. That, I think, is a weak light in which to view our striving. We runners are not so passive, not so reflexive. We run up and over mountains, never mind that we may be the ones who’ve put them there. We know that mountains do not give chase; they stand in our way.

So what’s at the top, anyway? First, there’s the view, the wide sunny prospect that allows one to finally see where one came from and where one might go next. Second, there’s a descent. There is, in every great running story, a watershed, after which it is clear to all that, whether the hero runs faster or slower or not at all, he no longer grinds against the weight of the world. From here, he may run on to new vistas, or retrace his steps home. Having run with a heavy heart for three years, two months, fourteen days and sixteen hours, Forrest Gump suddenly stops and declares to his assembled acolytes: “I’m pretty tired. Think I’ll go home now.” A flat desert road on a day of no particular importance: this was the appointed time and place for Forrest to get to tell it on the mountain.

Whether tomorrow or a month from tomorrow, we’re sure to hear the words, “Why do you want to run that marathon? That treadmill? That track? That whatever?” We might just shrug and invite our questioner to join us. But if we’re feeling chatty that day, we might invoke the spirit of Mallory and answer (with an inward pointing gesture), “Because it’s here.”