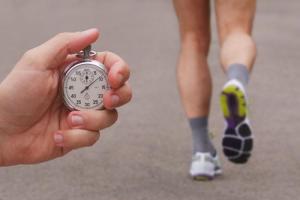 As a social sciences major in college, I skated by with a single math course: math for non-majors. I received an A for showing up and feigning interest: sad but true. And what did I need math for anyway? That’s what calculators are for, I reasoned. It wasn’t like I was trying to get into an MIT graduate program.That was long before I discovered running, and started seeing numbers everywhere (though it will never be said of me that I have a beautiful mind).

Running, as we commonly experience it in the West, is an intrinsically quantitative endeavor. At its heart, running is one of the most beautifully simple things; but we cannot resist freighting in with a little Western—a little intellectual—baggage. We measure out courses. We time performances. And that’s just the beginning of it. We record and target mile splits and average paces in our quest for zone-based training runs and record performances. We sometimes run indoor tracks of the oddest lengths: 1/11th, 1/13th or 1/22nd of a mile, where running at a target pace requires more division than a person should ever have to undertake while simultaneously counting laps (and possibly measuring leg turnover in steps per minute, monitoring heart rate and thinking about the stack of work on one’s desk).

And in this little piece I’m not even going to take on that bugbear of the American runner: converting meters and kilometers to miles, and vice versa. There’s a topic unto itself.

Sure there are myriad online calculators and aps designed to rescue runners who took only math for non-majors. (They’ll even say what your pace would have been had you taken your training run in Bogotá, Columbia with a 12 MPH headwind at 67 degrees and 80% humidity—in case you ever needed to know that.) And there are GPS sport watches to monitor our time, distance and average pace with a more-than-acceptable level of accuracy.

Problem is calculators—even phone apps–are a bit inconvenient to use while running. For convenience, nothing beats our hands-free onboard computer.

Now I’m not going to claim that any running math vies with differential calculus—or even Sudoku—for difficulty. But I will say that the most basic math can be a challenge when discomfort and fatigue set in during a challenging run, when we can’t hear our thoughts for our labored breathing. (And after we’ve “hit the wall,” we’re doing well to know what the date is.) Though no Isaac Newton, I’m always running the numbers when I run. Here’s an example: say I run the first mile of a six mile trail run at an 8:37/mile pace, and I decide that today I feel like running an 8:00/mile pace. What should my average pace for the remaining five miles be? My GPS won’t give me that figure (though I broke the bank for the darned thing). The answer is that my average pace should be a shade under 7:53/mile. I’d better get on it! I check my watch frequently and try to hover around the prescribed pace. How did I find my new pace? By taking the 37 seconds that I have to make up and dividing it over the next five miles. The result is that I have to run 7 seconds and change under an 8:00/mile pace for each of the next five miles. Of course I may reassess my pace at 3 or 4 miles and have to run the math again and again as I approach the finish of my run.

And here’s another example. I used to do the bulk of my winter training on the indoor track (a Lilliputian oval) at the Downtown YMCA. (Hey, I felt remarkably liberated—and fast—when I actually started running in a straight line again.) Preliminary to finding my time per lap, I converted my target pace from minutes (e.g., 8:10) to seconds (e.g., 490). I then divided the seconds by 22 (the track is 1/22nd of a mile long). In order to run an 8:10 mile on the Downtown YMCA indoor track, one must maintain a shade faster than a 22 second lap, all the while trying not to endanger stray children and patrons attempting to cross from the encircled weight and cardio machines. Being the instinctive runner that I am, I was always revising my pace and recalculating on the fly.

Of course the math is laughably easy, but even so, it offers the brain a bit of a workout. By now we all know that the “use it or lose it” principle applies not only to physical conditioning but to cognitive conditioning as well. Mathematical thinking (like reading The Long Run) can be a powerful weapon in the war against Alzheimer’s disease and the general deterioration of cognitive function frequently associated with the aging process. Once again, running is a winning ticket. By engaging the mathematical brain, running can chalk up yet another benefit to add to its ever-expanding list of offerings.

Of course in time technology will catch up with the Western runner’s needs and whims. Some computer-age innovation will render the mathematical brain superfluous, and free it from the need for cumbersome calculations and challenging multitasking. As always, this will be part blessing, part curse, and an encouragement to leave off using yet another portion of our brains. But we are runners. We stubbornly, insistently continue to use our legs when convenient forms of transportation abound. We bristle at the easy way. We will forever be throwbacks to simpler times: when we used our legs to get from A to B and still did math in our heads.