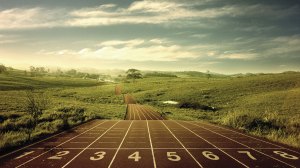 One of my favorite thinkers, Henry David Thoreau, once confessed to preferring a wide margin to his life. His admission is memorable to me because of how well it resonates with my own inclinations. I am no devotee of structure—especially not structure for its own sake. For better or worse, I’m a free spirit—and never freer than when I’m running. Needless to say, I have never taken to speed work like the proverbial water fowl to water. In fact, you could say I loathe the stuff. For those made like me (and many like me seem to gravitate to running), there’s a lot to loathe about speed work. Most speed work has a certifiably redundant structure. That’s reason number one to loathe it. First there’s that warm up thing. Then there’s a hard 400 meters (substitute 400 meters for 300 or 800 meters, if you like), timed. Then there’s a timed rest interval. Then there’s another hard 400—faster than the first. Another rest interval. A harder 400. Rest interval. Hard 400. Rinse. Repeat. Then finally, like a gubernatorial pardon, comes the cool down (the warm down for literalists). An advanced rule of speed work states that if you can accurately count your 400s and rest intervals, you aren’t working hard enough to achieve the level of staggering pain that interferes with elementary cognitive functions (or you spent too much money on your stopwatch). I figure that in my speed work days I usually put in an extra 400 or two—before finally splurging on a state-of-the-art GPS sports watch. Yes, there was a big, amazing world out there, and there I was going around and around between two white lines. That was before I abandoned the oval for greener pastures.

Those who have done battle with the oval know that speed work really hurts. Not just once, but eight to ten times (not counting the pain that lingers through the first half of each rest interval). That’s reason number two to loathe speed work: The pain. And for what? If you do it just right (meaning you don’t cross the tipping point of overtraining or injury), you might slash 30 or 40 seconds off your 5 or 10k time. While that’s nothing to sneeze at, it’s never been enough racing bang for my training buck.

Now I don’t mean to say that I’ve given up on getting faster. Never going to happen. But I have chucked conventional speed work. And even that didn’t happen overnight. I experimented with other less-structured forms of speed work first. I tried time trials. They really worked. But when I began to anticipate them with pre-race jitters, I abandoned them in short order. I mean, if you’re going to leave everything out there on the course, shouldn’t you at least get a bite-sized energy bar in your goody bag for compensation? I tried in-and-outs (two minutes fast, one minute slow x 10) on favorite courses, seeing a lot more of my sports watch than the great outdoors. In the end it was apparent that I’d traded running my favorite course for something like running the gauntlet.

No, the only way for a rebel like me was to trick myself into believing I wasn’t doing speed work when in fact I was. Now I’m not an easy one to dupe. Not even for me. If I wanted to trick myself with speed work, I had to be sneaky about it, call it something else and deny until the last possible second that it was actually happening—until that moment when I said to myself “I guess I’m doing speed work now. Might as well gut it out.” The only way was to unwittingly arrive at that moment when I was too far engaged to pull out, like a skydiver who had just stepped from a plane, when there would be no point in fighting it, when I would just let go, as if into the arms of gravity.

I’m no coach, so I’ll stop short of prescribing my methods for everyone. I can only tell you what has worked for me and hope that it might speak to the other free spirits among you who, in your readiness to be free of the track, have abandoned all hope of getting faster. My answer to the speed work question is the progression run. I didn’t invent it. It’s too natural to have needed inventing. It’s as natural as…well, giving way to gravity. For the running lexicographer, progression running is nearly synonymous with negative split running, except that it’s more extreme.

Here’s how progression running works for me. Once or twice a week I pick a favorite course. I start running slowly (that’s key). After a mile or two I begin to build my pace. I let the speed come to me; I don’t rush it. Still, by the middle of my run I may be at tempo pace without having given it much thought. I continue building speed gently until a mile before the finish of my run. I top out at goal race pace or faster in the final minutes. Then it’s over…except for a blissful mile of cool down time. One rising movement culminating in a crescendo of exertion. You wouldn’t expect a great film to have eight denouements. Why should a great training run?

Pros: You don’t have to kill your weekly mileage just because it’s speed work day (I’ve done 10 mile progression runs and felt invigorated afterward). It’s perfect for slow starters. It simulates ideal race pacing (negative splits). Done correctly, it gives the runner significant time at threshold and VO2max paces. Cons: I can’t think of any…oh, it may challenge your iPod mixing skills (tip: start with the Carpenters and end with Rage Against the Machine).