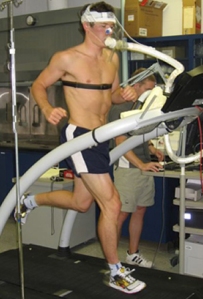 It happens all the time: Someone asks about my time in such-and-such race. I give the numbers. If the asker is unacquainted with human potential as it applies to running, he or she is more or less impressed. But if the asker is a true enthusiast, I‘m left with that same feeling I had when I dug in my pockets for all I had and still didn‘t have enough for that popsicle the ice cream man was on the point of grudging me.

Of course folks are almost always tactful in reacting to the revelation of my times, but I can tell when I’ve let someone down. You see, with 6% body fat and long sinewy legs, I look like a elite runner (if a few years past his prime). And if I’ve recently dropped a few C-notes at the Boulder Running Company, I’m probably decked out like an elite runner. But the similarities end with the dimensions and the brand-label trappings. It’s my unhappy distinction to be one of those folks who look faster–much faster–than he is.

This used to baffle me no less than it baffled bystanders. How can that guy with love handles be up there, when I’m back here? How’d that Clydesdale winner beat my age-group third-place time? This was like a cement mixer beating a Lamborghini (or at least a Honda Accord), a Saint Bernard nudging out a greyhound. Clearly, things weren’t as they seemed. There were things going on under the hood to which I wasn‘t privy.

This remained a frustrating mystery until a friend of mine, unaware of my befuddlement, suggested I join him for some tests at a local college. It was to be just for fun and to give some students in the Sports Physiology Department a crack at testing V02max. Mounting a treadmill, I was wired and poorly fitted with some hodge-podge of an apparatus that blurred the line between mining gear and sci-fi movie costuming. The proctor (who looked incapable of running anything more than “the numbers“) told me to keep up with the treadmill as long as I could, while he gradually (so he promised) opened its throttle. If you’ve never had the pleasure of breathing through a mask and tube, let me tell you, it’s a greater challenge than you think (no wonder Vader always wanted to hurt someone); and running (or trying to run) at sub six-minute mile pace under such conditions presents a tenfold challenge. I gave the cut sign . . . embarrassingly early. Minutes later the proctor handed me my results. What was that grave look in his eyes? Was he really going to say, “I’m afraid it isn’t good,” like doctors in movies do? Nah. It turned out I’d done ok . . . just fine . . . above average, in fact. This was great news. Right? Wrong. I’d wanted to be a stellar performer; I’d wanted to be off the charts. After all, wasn’t I a prime athletic specimen? You only had to look at me to know it.

Well, my heart, it seems, wasn‘t all there. With a V02max hovering around 60, mine might be the heart of a lover, or the heart of a poet, but it wasn’t the heart of an elite runner. I’d welcomed running into my heart. And now it seemed my heart didn’t have room for it.

Novelist Henry Mackenzie once said, “the heart is for saving what it can.” And so I followed my heart . . . to the internet. Could it salve my ego? A look at the V02maxes of historically great runners reveals that V02max isn’t the last word–uh, formula–in running success. If it were, the Boston Marathon might be decided by having its contestants breathe through a mask and hose for 12 minutes on a treadmill. Medals could be awarded ten minutes after testing, no police blockades, no aid stations, no clean up . . . no fun. V02max defines the upper limit of one’s ability. That’s all. There’s always a little slack to play with, a little untapped potential left in which one‘s hopes may find elbow room. It’s up to each runner to tap more of his potential than the next guy and hope that guy’s V02max isn’t off the charts. The last word, it seems, is still to be sought in our heart of hearts.